Well, Don and I were able to get our free copies of Flames of War 3.0! Both of our copies instantly starting falling apart while trying to find rules and gaming, but hey! The rulebooks are free so I am not complaining. Off to the binding machine with ye!

I've purchased copies of Grey Wolf – and Red Bear (I wasn't going to get it right away, but I am such a sucker) – to go with the new rules, so I should be set for awhile. (Yeah, right.)

We took it slow and easy for our first game. I tried to challenge all assumptions about the old rules and look everything up again, so it went slow if for that reason alone. We played 750 points each, Late War on the Eastern Front, and I ended up with four Panthers while Don had four ISU-2 (maybe?) and two platoons of Sappers?

I pulled out my bocage (made by Luke Melia over at WWPD) and we played it as hedges, plus added some roads, woods, orchards, and a building. (Click pictures to enlarge.) 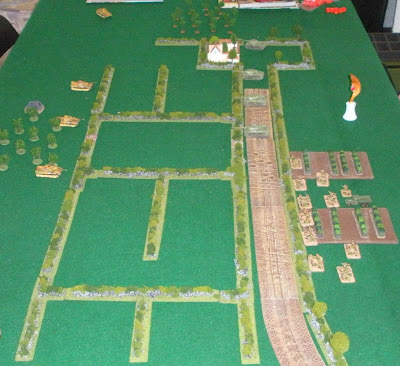 On the left, in the center, are the three Panthers of the combat platoon. The Company Commander is all the way in the top left, hiding behind the woods. As we are playing Free For All, I am not sure who is going to go first when I am setting up. (It turns out Don will go first.)

On the right are the Soviets and they have their infantry in the orchards with their tanks to their immediate right. To their right is their Battalion Commander hiding by the building. (The tanks are a bit advanced as this picture was after their first turn.) 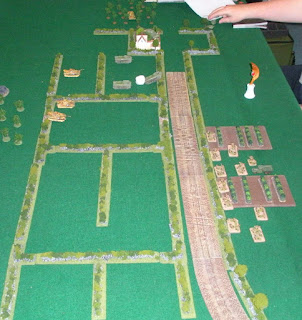 As you can see above, which is a few turns later, the German Company Commander has flanked the Soviet position. This has caused the Soviet Commander to push his tank through the building's walls in an attempt to poke his barrel out the other side and shoot at the Panther. Instead, he bogged down and pretty much remained so for almost the entire game.

The Panthers cooly stayed stationary, at long range, behind the hedges and blasted the Soviet tanks, which pushed on to sort range in hopes of doing something to the Germans. So far one of the Soviet tanks has been popped, so unless they get lucky, they are just waiting to die (ROF 6 versus ROF 2 at this point). 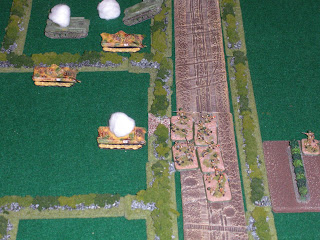 Eventually the German Commander flanked the Soviet tank position and destroyed the ISU's from the flank, then remains on guard in case the Soviet Commander pops out. Meanwhile, we need to see what the assault rules are like. The German Panthers get too close and the Soviet Sappers charge out. On my turn I had only thrown nine dice for the MG fire instead of 12. In defensive fire I remembered I had two MGs and thus four dice each. Yet with 12 dice I could not manage to pin the Soviets (and they save all four hits).

The Sappers get two hits and bail my Panther. The Germans, spread out as they are, cannot bring but one tank to bear in Counterassault, so the odds do not look good to me; I decide to pull back (as shown in the picture above) and leave the one tank to its fate. 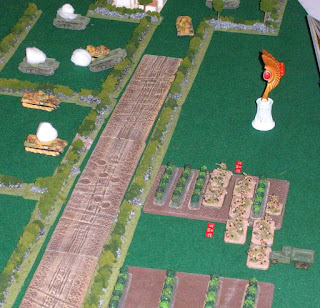 Eventually the Soviet Commander leaves the building, passing one Bog Repair and one Bog Check (for Very Difficult terrain, so a Skill Test), and all three Panthers focus fire, popping him. At that point I ask if Don concedes, but he believes he can still win it. After a turn of MG fire at 16" he realizes that with a 10" assault range, it is just going to be sheer luck for him to catch me (if I bog reversing across a hedge), so he concedes.

Not much action, but we really did not read all of the rules before jumping into it. Everything was the same except assault, and that was not much different. The truck got to move a little faster on open ground, but he was shadowing infantry, so it did not really matter.

A great little scenario to learn with. Nothing too strenuous.

We are still not too sure what to do with ROF 1 Guards tanks, but we are getting to know what not to do! They do look cool though. I think they will come into their own at 1,750 points or more.
Posted by Dale 5 comments:

Welcome to new reader 'baxterilius' (Craig Baxter). Hope you enjoy the blog. Not "all Flames of War, all the time", but it stays in my rotation. (To be honest, I sometimes envy those that stick with only one or two periods.)

So Baccus Miniatures has started shipping their new Brunswick line of Napoleonic figures! When I played Column, Line, and Square as a kid, one of my friends had all of the Brunswick troops painted up. It was a nice, compact Division and made for a nice separate command. Seeing as these figures look just great, I decided it was time to get my own Brunswick command for Drums and Shakos Large Battles (DSLB).

I started by looking up their order of battle for Waterloo and found that I would need the following.


1 I want the battalion in both formed and skirmish order, so I am going to use the 1866 Austrian Jagers for the formed unit.
2 As this is such a large cavalry regiment, I am considering running it as two separate units in DSLB.

For DSLB that will probably make the stats:


As you can see, the troops are actually not all that good. They were conscripted and had little experience. Only the Jagers, cavalry, and artillery had any real experience. Nonetheless they will be easy to paint, have a bit of color (sky blue and yellow looks nice on black) and is a historical Division.

The infantry units will be six bases (even though DSLB only uses four) each of 16 figures (four strips). That makes each battalion 96 figures – an impressive amount of "mass" – which is exactly one Baccus pack. That makes each battalion about $11 (counting shipping). Carrying that forward, that means that a Division of about eight battalions, two cavalry regiments, and a battery of artillery will cost about $100. Although that may sound like a lot, understand that I am using big battalion sizes. In Polemos, Baccus' rules for 6mm, each battalion is one-quarter the size of this, so a Division would be somewhere around $25.

Well, I now all I need to do is pre-order them from Scale Creep Miniatures.
Posted by Dale No comments: