Wow, even though I only fought two battles on April 14th, it feels like a lot has happened. Certainly in terms of scenario and rules development it has.

The Second Battle of Firnskuppe did not produce any casualties, but it should have. (I am still experimenting with a campaign casualty system and both sides got off lightly in this battle and the first.) The Ambush on the Forest Road, however, was a bloody affair as the Battle Frenzy Twist card came up, allowing units to fight in circumstances where they normally would not be able to fight at all (but at reduced effect). The downside, however, was that it increased casualties.

One of the things that this last battle has helped me to develop is the backstory of this campaign. You would have thought I would have worked all of that out, but I sort of go with the idea that you don't try and figure out details until they become necessary. Granted, this makes the backstory fit the narrative after the fact, but I am okay with that.

The Ambush on the Forest Road felt very much like playing out Braddock's Defeat (a.k.a. The Battle of the Monongahela), which I would never have even considered gaming out normally. (Okay, that is a lie, I did try it out in a game of Clash for a Continent by Worthington Games. I have also played The Battle of Oriskany, another bloody ambush. But generally I avoid them, and have never played them with an opponent. 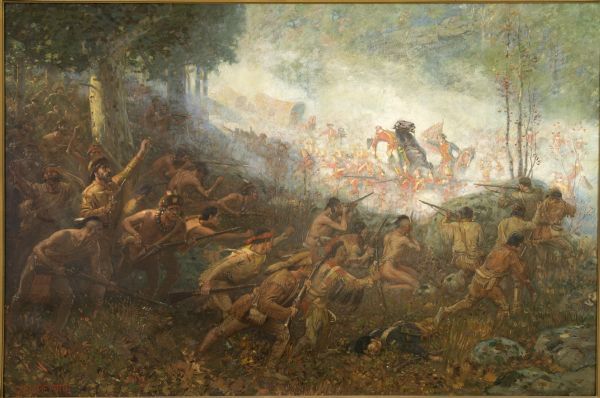 This campaign was ostensibly between two neighboring countries – Westonian to the West and Eastonia to the East – and was developed by my (long-distance) gaming buddy Justo. He saw the campaigns on the Joy of Wargaming YouTube channel (hosted by Jon Mollison) and he decided to create his own version of The First Elopean War, but he never completed it. When I suggested a campaign based on another campaign from that channel – which was a skirmish campaign, not a "two nations at war" campaign – and it fell through, Justo convinced me to try his campaign.

Basically the campaign takes elements straight from The Solo Wargaming Guide (TSWG) – which Jon uses quite heavily in his own campaigns – one of which is force generation. Each village, town, and city produces a certain number of troops and garrisons for the campaign, which is the currency that the player has for the campaign. Basically A- and B-class cities produce regiments and C-, D-, and E-class towns and villages produce companies. Normally, a regiment consists of five companies.

Here is where something interesting took place. Justo wrote up his troop muster and orders (for Westonia) separate from me, while I wrote it up for Eastonia. I wrote up some campaign rules to fill in the gaps that TSWG left and one area that I touched upon was what to do with these independent companies. I allowed players to convert a certain number of independent companies to Artillery companies for one thing, but I also had conversion rules for turning them into light infantry and light cavalry. I used those light troop rules, but Justo did not. Justo wanted all of his independent companies not designated as artillery to muster and consolidate into line troops – both infantry and cavalry. Essentially Westonia was a nation with no light troops while a considerable portion of the Eastonian troops – about ⅓ of them – were.

Westonia was Great Britain in North America before it realized that it needed to develop light troop capability and Eastonia were the French and their Indian allies. 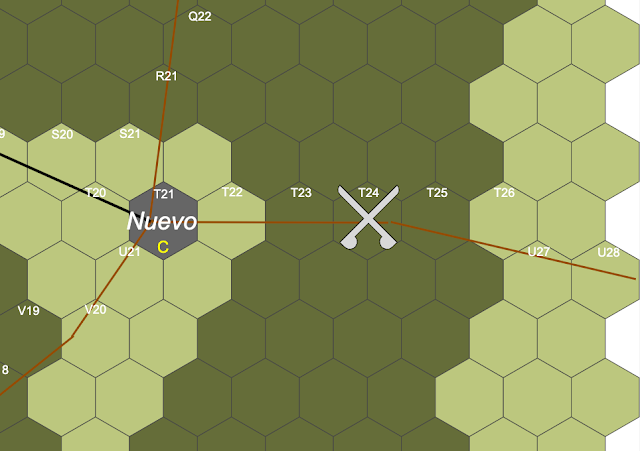 So, I am left with a campaign where one side has no light troops and the other side does. That may definitely be an advantage to the Westonians on the set piece battlefield, but as you can see, they have 15 miles of woods to travel through, and hard-riding skirmishing cavalry caught them on the march. Worse still, light infantry and more light cavalry are only 1 ¼ day behind. Even if the next battle on the forest road is not an ambush, I fear it will me much worse for the Westonians if they try and push through to Tierwalt (the destination town they have orders to capture).

Even worse, even though Westonian troops have captured Firnskuppe with a surprise attack (Eastonia was hit here first), the troops are stuck when it comes to advancing on Erlenloch (the east road route from Firnskuppe) as it goes through heavily forested roads. 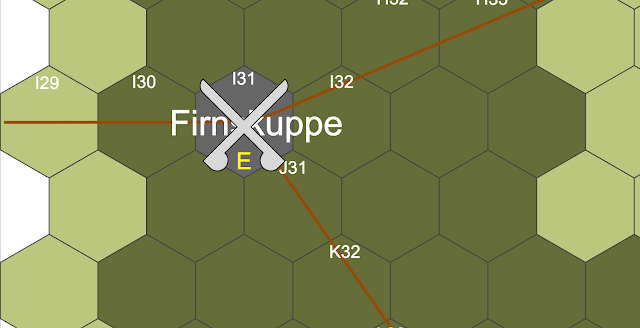 The route southward is even worse.

This makes for a very interesting problem for Justo. (I have lit up the Justo Signal and have asked him how he wants to proceed.) As Eastonian forces converge on the Westonian troops in the forests, I think the latter are going to get torn up while they are in march columns. As for the Eastonians, they may be able to push the Westonians back, but can they take the eastern Westonian villages and keep them? (My objective for the campaign was to only occupy Nuevo, the first village on the southern road (see the second image above), and sue for peace, gaining some advantage in the ensuing peace negotiations.

When a unit is eliminated, it takes 33% permanent casualties if it was eliminated by musketry, 50% if by artillery fire or close combat with foot troops, and 67% if by close combat with mounted troops. This is the "killing blow"; you do not have to mark hits by type and figure things out proportionally. For units not eliminated the casualty rate is 25%. All hits lost round up. These losses are permanent for the duration of the campaign although we can look at replacements if this campaign runs long enough.

First Battle of  Firnskuppe: no casualties.

One thing I have realized is that casualty rates will determine how decisive each battle is, and how short your campaign will be.