Rules and the Art of Abstraction

So, tip of the hat to ECW 40mm Project (Allen), who made the following comment on my blog post Conclusion to Tin Soldiers in Action:


The rules sound like they hit a sweet spot.

The only thing I don't think I could leave untweaked would be that there is no flank or rear. It's such a basic aspect of the structure of humans [go down a dark alley in a bad section of town...do you get mugged from the front or the rear?] and the structure of units [especially when Units are supposed to face front and pay attention there] that I would have to do something about it. Not that it would be hard.

However...I am wondering if the designers have an explanation as to why they left it out? After all, it is as basic a game design as cavalry move faster and artillery shoots farther, so surely they left it out on purpose, so...why Why WHY??

First, I am not the game designer, nor do I speak for Rüdiger Hofrichter – who is very approachable, by the way – but given your accurate statement "The rules sound like they hit a sweet spot", I can speak to why I don't tweak the rule, and why I continue to leave it as is.

A flanking rule would be a distraction, and in all probability, inaccurate. To me, Rudi decided to abstract our flanks. Let's break it down a bit.
Let's stop there a minute, because if you don't agree with the abstraction of not reflecting a unit's formation, we are already at an impasse. At the scale I am playing, when using Tin Soldiers in Action, these are things I simply do not want to micro-manage.
If you are still with me – that abstracting away control of the atomic unit from the player and assuming it is the unit's commander and that, in general, they will face in the correct direction and use the most appropriate formation – then let's continue on.
The answer is, it doesn't unless there is also a force engaging it to its' front. 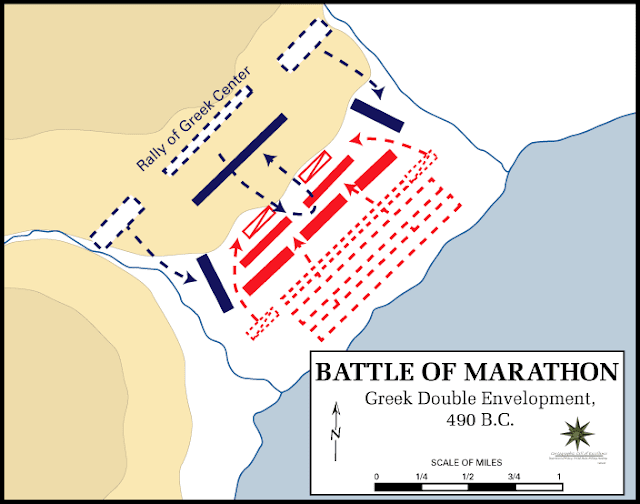 When you are assuming that a unit is properly positioned, when threatened by a single unit, there is no advantage, so why model it?

Well, they are being attacked from two sides, right? That has to have some kind of advantage, right?

Sure, but now let's take a page from the King of Abstraction, Neil Thomas. In Wargaming Nineteenth Century Europe 1815-1878 he writes:


For complex rules tend to suffer from conceptual flaws. The chief among these is what can be referred to a 'double jeopardy', or to be specific, accounting twice for a contingency that should only be considered once. For example, units which are behind cover frequently enjoy a morale bonus in complex rulesets; however this fails to account for the fact that the role of cover has already been accounted for, given that the unit within would suffer fewer casualties than its more exposed comrades. If the unit behind cover is still suffering sufficient casualties to endure a morale test, then it is clear that the cover is no longer doing its job – and should not therefore confer any morale bonus.

So, if we have agreed that coming at the flank of the enemy with a single unit does not confer a bonus as the enemy simply turns to face you, i.e. it is not "flanking", then a flanking situation occurs only when a unit is being engaged by two or more units, coming at you from front and side or rear.

But, what is that actual advantage? Well, one is that you have effectively placed two units onto one, therefore you have a concentration of firepower. But that would also be true if you were engaging with two units from the front. So that is not the advantage of flanking.

Well, the combat power of the flanked unit is diffused because it is facing two directions and firing at two units. But saying you have diluted combat power is just the opposite of saying the enemy has concentrated combat power. Again, this would be true if facing two separate units from the front. So that is not the advantage of flanking.

Some rules put forth the concept of enfilading fire, defining enfilade similar to Wikipedia:


A formation or position is "in enfilade" if weapon fire can be directed along its longest axis. The benefit of enfilading an enemy formation is that, by firing along the long axis, it becomes easier to hit targets within that formation. ... Enfilade fire takes advantage of the fact that it is usually easier to aim laterally (traversing the weapon) than to correctly estimate the range to avoid shooting too long or short. Additionally, both indirect and direct fire projectiles that might miss an intended target are more likely to hit another valuable target within the formation if firing along the long axis.

Here is where the rub is. In order to model enfilade, you have to track a unit's exact position and formation at all times. And you have to care. Neil Thomas, despite having rules to track a unit's position and formation, still provides no flanking bonus as suggested by Allen, in the ruleset cited above. So clearly Neil feels that flanking bonuses fall into the realm of 'double jeopardy'. So do I.

If we read the descriptions of any battle, how do you know which factor produced the 'devastating fire from the enemy'? Was it their Elite morale bonus? Was it their Superior Training rating? Was it their First Fire bonus? Was it just that they rolled a '6'? We don't know because the truth is we are not trying to create an accurate simulation of war here. Hell, we cannot even model the track of a hurricane accurately, much less weather in general because of the complexity in variables, so how are we to succeed with war? The truth is that we add bonuses and subtract penalties because it 'feels right', not because it represents a measurable, quantifiable, factor.

So I say that flanking fire is more effective because you are pouring fire (or swinging swords) from two units versus my one. This represents the concentration of combat power on your part and a dilution of combat power back. Yes that is the same as if you were attacking with two units to my front. Prove that moving one unit some number of degrees to the side has a measurable, quantifiable benefit and I will consider modeling what has been abstracted away.

So, we've looked at whether it should have a benefit or not. Let's look at the benefit versus the cost of having such a rule. As previously stated, the first requirement to getting a flank bonus is defining a unit's flank. That means you must track a unit's position and orientation, at the very least. Given that enfilade of a line is from the side and enfilade of a column is from the front, formation is now another data point you must collect.

Let's go back to the first assumption at the top of the post: we have non-player commanders responsible for that, leaving me, the player, free to focus on higher level information and not mired in the minutiae of unit administration. You have to decide: are you player a Commander-in-Chief or are you playing a collective of unit Commanders?

From a rules detail perspective, think of all of the rules that you have read and how they deal with flanks. Some say that if you end the move behind an imaginary line running along the front edge/through the middle/running along the back edge of the front stand/unit then you are on the flank. Other say the same, but only if you started and ended behind that line that turn. Maybe the rules align stands in combat and thus the requirement is your unit's front face is flush against the enemy unit's side face, but only if at least half/all of the unit is in contact. The combinations are endless.

Do you know what these sort of rules produce? Arguments. Did you meet the conditions before you started the move? Did you have enough move to get to the exact position by the end to count as flanked. Is it really realistic that you don't could because you were 1/4" too far away? (Don't get me started about grids...)

You know what else these sort of rules produce? Pages or explanations. Generally up for interpretation (unless they were written by Phil Barker ... on second thought, those are too).

The core principle of Tin Soldiers in Action is to produce a set of rules that do not produce arguments. It does not accomplish this by being precise, but rather by abstracting away the elements that we like to think we can accurately define, but are actually fooling ourselves by saying we not only understand why a unit in such a position would have an advantage, but what percentage bonus should be applied.

So Allen, what flanking bonus did you apply when you tweaked Wargaming Nineteenth Century Europe 1815-1878? How many words did you have to use to define what a flank was and when a bonus would be applied in combat? How did you determine what the bonus should be? Just curious.
Posted by Dale 9 comments:

This segment covers the morale mechanics, along with the hidden deployment rule in my on-going review of the company-level WW II miniature gaming rules Hail of Fire by Brandon Fraley of Retroboom Games.

Too Long Didn't Listen version: Morale rolls are simply unmodified rolls against a static target number, which is determined by the Quality attribute.

The hidden deployment rules are apparently not everyone's cup of tea, but it is what drew me to continue to play these rules. 6:28

Next Segment: Final segment, my ratings for the rules
Posted by Dale No comments: