If you have been reading this blog for a while then you know I often game on boards that I make out of Elmer’s foam core boards. The smaller, cheaper ones that you can find readily available are about 30” wide by 20” deep. They take ink, colored pencil, chalks, and pastels well (although you probably want to seal it with matte varnish, especially if you use chalks), but if you use anything water-based, you will have to deal with warping.
Given my move to small board, grid-based gaming, these work pretty well for me.
The one thing that I like especially about Neil Thomas’ One-Hour Wargames is the scenarios. Although generally simple, I think too many gamers get bogged down in too much scenery. (Lots of scenery is a necessity for skirmish games, but you probably need to abstract a lot of that away if you are gaming at a higher scale, i.e. units are brigades, rather than individuals or fire teams.) Neil’s scenarios are very sparse when it comes to terrain. They remind me of the tactical exercises I used to game – where I would attack a woods or a house – until I understood the basics of tactics in whatever rules I was running.
Because the terrain in Neil’s scenarios is very sparse, and has no random element in its placement, making a gameboard for an often played scenario makes sense. Here is what mine looks like for Scenario #8 – Mêlée.
This is the view from the Red side. 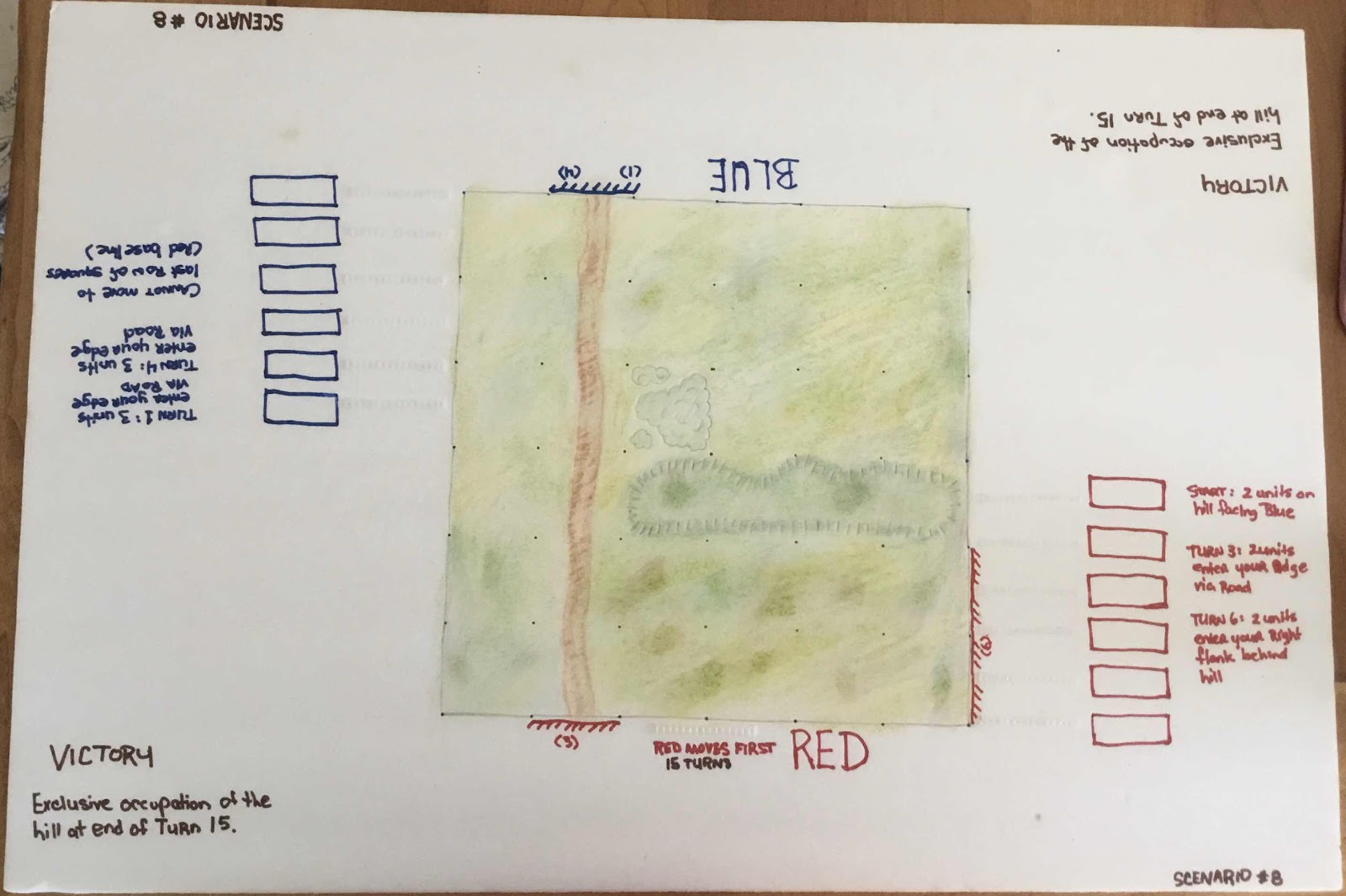 Although it is hard to see (I should probably paint them) there are little strips of plastic needlepoint ‘grating’ to the left of the red boxes. You move a peg from hole to hole, indicating how many hits have been inflicted. There are 15 holes, so you can either handle units with 15 or 16 hits. The red boxes each hold markers to indicate which unit each represents.

At the bottom is another strip with 15 holes, which is the turn track. Given than Red goes first, the turn track goes on his side.
This scenario has special rules around unit placement, reinforcements, and unit entry points. You can find those rules to the right of the unit tracks. Finally, there is the victory condition, found in the lower left-hand corner, to remind you to focus on the objective.
Here is a view of the Blue side. It has the same basic setup as the Red side, with the details differing, as per the scenario. There is no turn track, however. 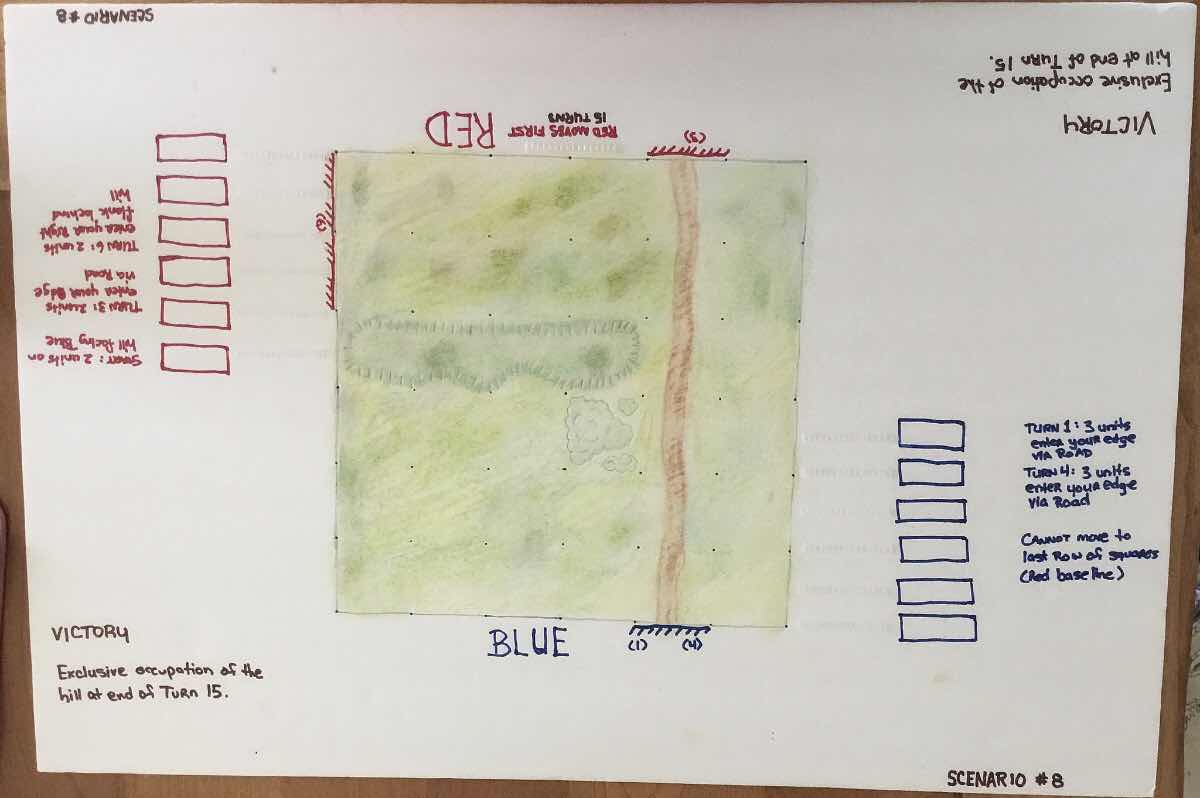 The first game I am going to run is using 15mm DBA units, which is why the squares are 2”. They will, however, represent 6” of table space in the game given that the recommended frontage of units is 6”. So one unit horizontally for each square. (I am still pondering whether to allow multiple units in a square. For DBA units, as long as they do not exceed a depth of 40mm, I should be good.)

I have been tinkering with an idea for One-Hour Wargames, but as I have not played it ‘straight’ yet, I am holding off right now. Everyone has ideas on how to make it better, but there is only one concept I wish to model. (Things like Elites, Large Units, etc. I think can be modeled as scenario rules.) My concept is Fresh Units. Basically, as a unit wears down in combat, it becomes less effective. Some of Richard Borg’s games reflect that by granting more dice in the attack when you have more blocks or figures in the unit. (Others, like Memoir ‘44 do not modify the roll at all. It seems like the larger the game scale, the more likely he will allow units to roll full dice until they are destroyed.)
Rolling multiple dice and adding them to count the hits would make units disappear faster, so that would throw off things like scenario length, reinforcement rates, and so on. My idea is simple, units with: 0-4 hits would roll 2D6 and pick the highest; 5-9 hits would roll 1D6 (as normal); and 10-14 hits would roll 2D6 and pick the lowest. Because I use pegs and holes to record hits it would be easy to color code the strip to indicate whether the unit is Fresh (yellow), Worn (orange), or Exhausted (red).
So, a unit that is worn down a bit fighting through the first line, would (on average) not hit as hard as the unit in reserve in the second line. This mechanic would also have the side effect of encouraging the use of reserves. I think few games accomplish that.
Posted by Dale 4 comments: