Now that I am retired, I can finally travel without feeling like I have to rush. Well, at least the reason for rushing has changed. It used to be that I needed to get back to work and now it is that my wife needs to get back to work! Equality, baby!

The original goal was to go to Fall-In 2022 in Lancaster, PA – a mere 2,200 miles/32 hour trip, each way – and make it a road trip across the U.S. but too many things fell through. I was going to combine the trip with a visit to my father, who was 94 at the time, but he passed right after I got out of the hospital. So we decided to wander around the West before heading to MillenniumCon 2022 in Round Rock, TX.

We started from home in Huachuca City, AZ and headed for the Apache National Forest to stay in Alpine, AZ, making it in after dark. From there we stopped at Chaco Culture National Historical Park where they have a number of cliff dwellings of the Pueblo people. When you think of American Indians (Native Americans, if you prefer) you tend to think of Hollywood's depiction in Westerns, but Chaco dates from AD 900 through 1150, well before what we think of as American Indians after the American expansion.

We did not stay there – there is really nowhere to stay as it is in the middle of nowhere – as we were on the way to Durango, CO. We had a timeshare unit there so it was really comfortable, but we were there for the Durango Train. Unfortunately the trains do not run for the first two weeks in November as they switch from the Fall to Winter theme and do maintenance on the trains. Guess when we arrived! Not only that, the museum is closed too!

To make up for that we decided to take a side trip to Mesa Verde National Park. This is another Pueblo culture site, dating from AD 600 to 1300. It was a beautiful drive and when we got to the top we found the museum … closed for renovation! I was feeling irritated by that until I heard another guy remark that this was his fourth time to Mesa Verde and every time he was there it had been closed for one reason or another, so I did not feel quite as bad.

My wife wanted to see Meow Wolf in Santa Fe, NM so we headed there next. Basically it is an interactive, experimental art project that you walk through with room after room of different themes.

My wife has also wanted to take me to Carlsbad Caverns National Park in NM and we finally went. Unfortunately, the bats were already gone for the season so we did not see them. But trust me, after walking 1 ½ miles in a cave more than 750' underground in a very humid 57º, the last thing I wanted to do was come back and watch bats in low light (as the come out/come back from hunting).

With those adventures under our belt we were getting close to the start of the gaming convention, so we made a dash for Austin, TX, which is a short drive from where the convention was being held. We stayed at a Wyndham timeshare downtown, was held hostage by salespeople, and eventually given a $150 gift card and promptly spent it on a very nice dinner at a posh place.

With my wallet screaming Uncle after buying yet more timeshare points it was off to Round Rock, TX for MillenniumCon 2022. We stayed there through the weekend then headed back home, stopping only to sleep in Van Horn, TX. Whew! 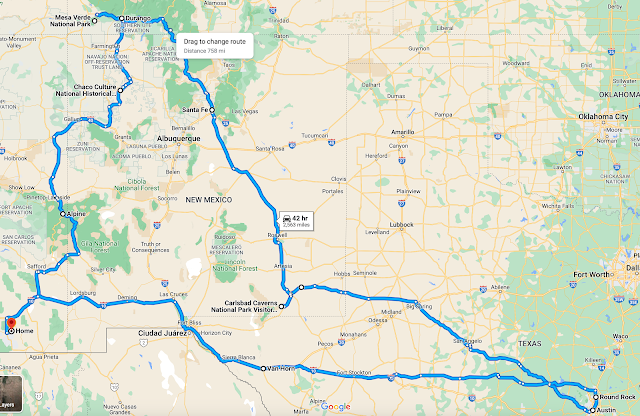 This is definitely a smaller convention, as far as U.S. gaming conventions go. There were about 1-2 dozen games going on at once. What I had not realized is that there was a section to sign up for games before the convention started. When I got there and saw all of the sign-up sheets, they had all of the player slots full, some even with the stand-by slots full! I basically could not sign up for a game and be assured of a spot unless it was in one of my gaming buddy's games. (Not because his games were not popular, but rather because he would make a spot for me.)

My buddy is a real fan of Two Hour Wargames (THW) rules and he has been trying to refine Morale Napoleon (MR) and All Things Zombie (ATZ) for some time now. I think ATZ is in a good place now – it feels very episodic – but MR is closer to THW's old school 'wargame' designs rather than the newer RPG-lite designs. I promised him I would help him playtest any ideas he had and we played about six games of it. I think it is a better design now, by far, but think it still has some testing necessary, by people other than us.


One game that I did play in that was a standout was Raid on Downly Green put on by Faron Bell and his son, using the rules A Fistful of Lead (FoL) and the supplement Might and Melee, both of which I have been experimenting with of late. The scenario takes place in late 9th Century Britain and raiders are attacking a village to steal their treasure and capture their Witcher woman. I was on the raiding team – in fact I was playing the raid leader – and we ended up slaughtering the defenders. We did not get the treasure, but we did get the Witcher woman, in addition to wiping out ⅔rds of their force, by the time the game was called. 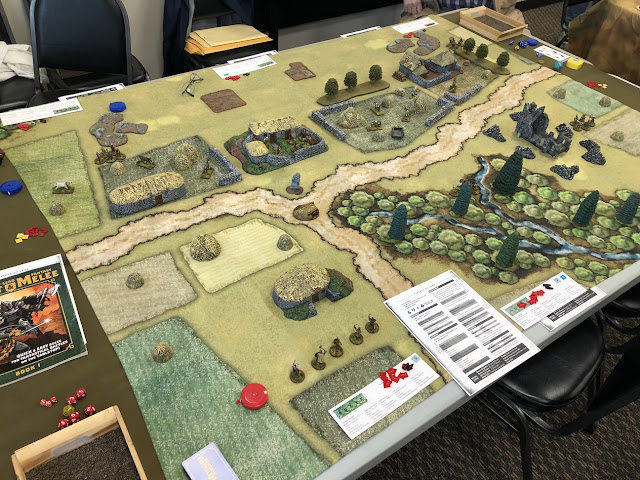 Why this game was a standout was definitely because FoL is a great set of rules for convention games (easy to teach, element of suspense) and because the figures and terrain used was outstanding. It almost made me buy 28mm terrain at the vendor booths!

Speaking of vendor booths I tried to limit my purchases to terrain, rules, and scenario materials, but failed in some instances. I did not find any rules whatsoever that interested me – I was hoping for an old cardboard box filled with old rules – but I got one very interesting book filled with scenarios on the War of 1812 between Great Britain and Canada and the U.S. I look forward to converting them to other rules, probably Tin Soldiers in Action and One-Hour Wargames for mass battles and Fistful of Lead and One-Hour Skirmish Wargames for skirmishes. Unfortunately, there was little terrain for 15mm other than Battlefront terrain for Flames of War, which I have plenty of. There was a lot of laser cut MDF terrain, but all of it was 28-32mm. I talked to the guy about that and he told me that he used to make models for 15mm, but they just did not sell. Further, he does not sell the digital files so you can cut your own. So all I walked away with were three books, one paint set, and some miniatures I regret buying and will probably end up selling.

I also got two more games of Tin Soldiers in Action (TSIA) in, playing the classic scenario Hook's Farm (from H.G. Wells' rule book Little Wars). The first game I was attacking and was absolutely slaughtered, so no pictures of that! The second scenario, however, I was defending and it turned out quite different.

Justo delayed coming onto the hill until turn two. This allowed me to press forward with my infantry and defend in depth. 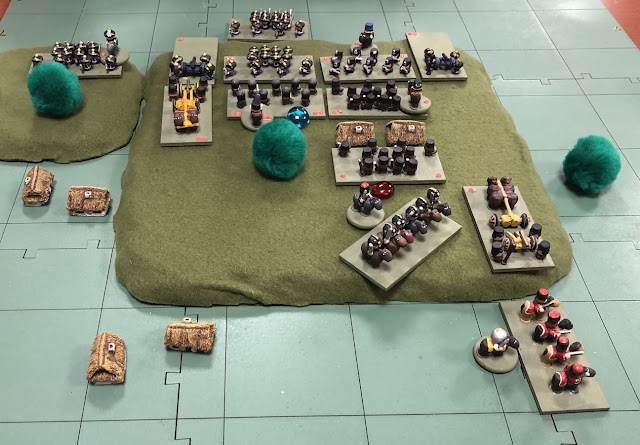 You can see Justo's cavalry in the lower right corner. He snuck around the flank, but lost the draw of the cards and my cavalry switched to counter his move and I decided to pull my artillery out of the line and canister his cavalry. 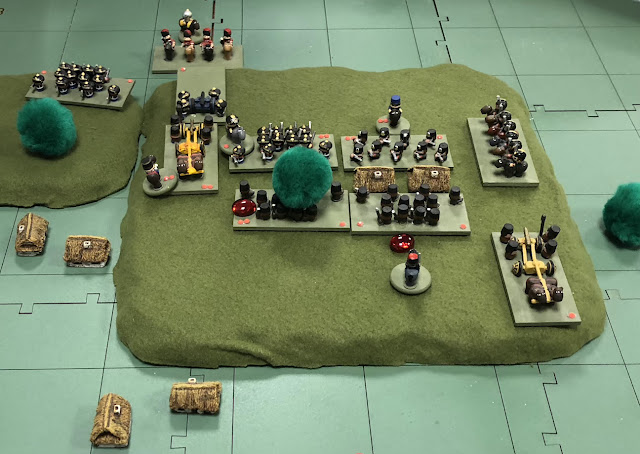 This next picture shows Justo's beaten cavalry turns later. My cavalry charged him and forced him to rout. It then turned around and made a desperate charge at his artillery (with supporting infantry no less) and ended up overrunning them against all odds. 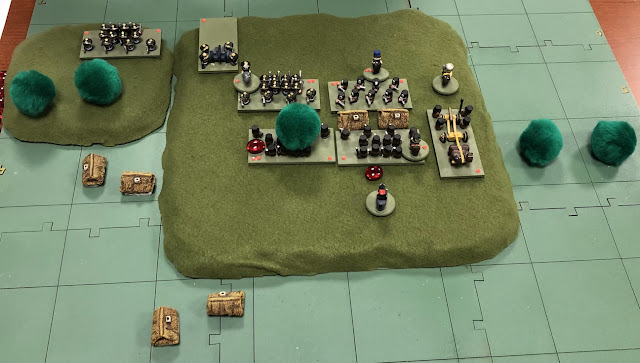 When the sun went down I was still in possession of Hook's Farm with units that had been severely mauled by his infantry and artillery fire. Again, this was a very different game from all of the others I have played with artillery chasing cavalry to canister them and light cavalry charging artillery and actually pulling it off.

One of the reasons for the renewed interest in TSIA is that I have been corresponding with the author, Rüdi, and he has new rules to cover from ancients to modern era (and beyond?) and he wanted us to reacquaint ourselves with the rules before attempting his Hastings scenario. More on that later.

Ironically, I took a few pictures at the convention, but it was mostly of the terrain boards and not of the games in progress. Also interesting is when people come up to a game in progress and look, but rarely ask questions, even when you attempt to engage them. The one exception, for me, was when Justo and I were playing TSIA with these handmade wooden figures. People did not care about the rules or the scenarios, but the miniatures. They are such a curiosity these days, especially when people are now 3D printing whole beautiful armies and here I am gluing beads together and painting them. I have never had anyone criticize them either, and you know how some people can be, pointing out that "…you have only painted five buttons when the 1812 uniform had six!" The 'harshest' comment I have ever gotten was 'it seems like it would take so much time to make them' or 'I could not paint something that small'. No one has ever refused to game with them nor made fun of the cartoonish terrain I use (which is strangely appropriate for the figures). (By the way, I used my laser cutter to cut out those board and score the grid on them.)

I have long realized that this, wargaming, is not a single hobby, but multiple ones. For me, I continue to like to make my own minimalist figures with large heads and small bodies.