One-Hour Wargames in the Age of Sail

Before I get into the subject in the title of the post, let me say that the virtual game of One-Hour Wargames (OHW) I have going with fello blogger Shaun Travers is still going, but coming to a close. We averaged about one player turn per day, although there were at least two days in which we each got a turn in on a single day. Shaun would generally make a move in his evening, which was about 2 AM my time. So, if I got up to go to the bathroom - and given that I am 58 now, need I say more? - I would see his move. I generally tried to hold off and wait to process the move first thing in the morning and there were a few nights that I did not wake up until the alarm went off.

Initially I used Microsoft Visio to make the maps and show the moves, but I eventually moved to an online, web browser-based, free drawing program called Vectr. As tools go, it is pretty nice. As the 24x24 grid alone is over 500 objects, it handles it all pretty well. I would make a drawing of the end of each player's turn and denote now many hits remained on each unit. Here was our setup. 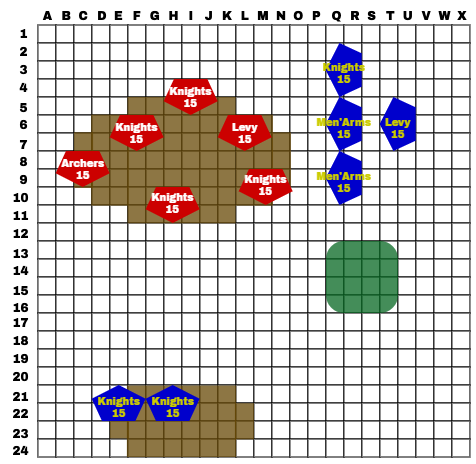 You will have to wait until the battle report to hear how we came up with this grid solution. It is a long story.

OHW in the Age of Sail

Do you have any of those Pirates of the Carribean PocketModels from Wizards of the Coast? Well I do. A lot of them. (And I mean a lot.) The only problem with the game was, the rules are not my cup of tea. Not only was it a game of micro-measurements (meant to be played on a very small space), but because the models were small, lightweight, and plastic, if you breathed on them heavily they would go skidding across the table. Because being 'in' or 'out' of range could be a fraction of a very small measurement, table bumps could be strategic. (This is why I stopped playing Wings of War, Star Wars X-Wing, etc. because a slight mistake could send models skidding, which was akin to knocking a Chess board.)

I have used the models, which are very nice if simple, for other games. The closest I came was a set of rules called It is Warm Work (IIWW), which I bought on Wargame Vault and actually played the one and only time I went to Cold Wars. Relatively simple rules with a couple of pages of ship data. Has the typical hit system where you check off boxes on a roster. The main difference is that the rules are not that crunchy, so you did not separate hits out between, say, rigging and hull. Much simpler than the old Avalon Hill game Wooden Ships and Iron Men.

Given my virtual game - and the discussion we had on converting free-form movement to grids - something went off in my head and reminded me of the vast collection of plastic ships I have stored away in a shoe box. If you limit one ship to a grid (unless there is a ram or collision) then the IIWW concepts might work, only maybe simplifying it further down to the OHW level.

First thing you need to do, however, is use a hex grid. Most sailing games do well with a hex as you can model a sail's reaction to the wind rather well. Wind coming straight on stops you ("in irons"), wind abeam (green) allows you to travel faster, and wind close quartered or aft (yellow) makes a little slower. 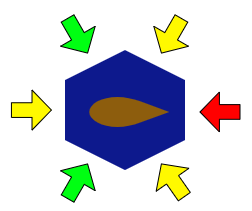 So movement would have to change a bit from OHW.

The core concept that you would keep, however, is that combat is simply reduced down to a single die roll. Whether you would roll a D6+2, D6, or D6-2 would come down to how many guns your ship has. Like OHW you would simply record total hits on the unit and once it reached a certain number the unit was removed from the board. (Whether that represented a ship running, striking its colors, or sinking was irrelevant from a battle viewpoint - you were out of the battle in all accounts - but might warrant figuring out if you were playing a campaign.)

If you wanted to go through the complexity of it, you could assign a different number of hits to each ship type. I would not go nuts with it, but you would probably find that the ships with more guns also take more hits.

Ranges, by the way, would be short. More like infantry arms than artillery, to account for the inaccuracy of firing  on an unstable firing platform.

Just some thoughts to toss out. If I expand on it further, I will definitely write a post about it.
Posted by Dale