Well, I threatened to start re-basing my 6mm Napoleonics and that is what I have been doing in my spare time. I decided that I wanted them to be on 40mm wide hexes, as I would be able to use them for games that use 40mm frontage for 15mm figures; I would just be using more figures. Also, 40mm bases fit comfortably in a Heroscape hex, and I want to get back to grid-based wargaming. (Bending over the table and measuring is affecting my back!

First up are some Russian Cossacks. I've used nine figures on a 40mm by 30mm Litko 3mm thick, wooden base. I placed them about randomly so I could tell that they are rated as Irregular Cavalry in DBN.

The fact that I did not paint black dots for the eyes is starkly apparent in this magnified photograph, but it is not when you look at them at half arm's length.

Next are Russian Dragoons on the left and Prussian Dragoons on the right. Same size base. The Russians have nine figures and you can see that leaves you with uneven ranks. Why nine? Well, Baccus cavalry is sold with nine cavalry being the standard unit size. With the Prussians I decided to try eight figures and I can say I like the effect just as well. As all of my cavalry is painted in sets of nine, I thought about using the extra figure as a marker for that particular unit. I could put it on a 1/2" square base, for example. Some rules that might indicate disorder, or blown horses after a charge, could use this unit-specific marker for that purpose.

So, I've resolved that I will now base my units in groups of eights. Rather than re-basing the three Russian stands I just based, I will probably use delicate surgery and extract one figure, then use some clump foliage to fide the "hole" – or maybe even paint it as a hole in the ground!

Next up is the Russian infantry (musketeers). They are on 40mm by 20mm bases, 16 figures to the base. Baccus sells them as units of 24, so at some point I will have extra units without flags, which is fine. 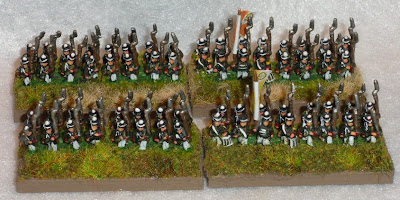 Although I only have four bases showing, I have based up eight so far.

By the way, all of the 6mm miniatures shown have been painted by DJD Miniature Painting Service. I have bought French, Austrian, Russian, and Prussian 6mm Napoleonic armies from DJD, along with quite a few 15mm AWI units, and even a few 15mm Napoleonic units (for skirmish gaming). I have been tempted to buy more painted 6mm troops from them, but they are now selling them pre-based to the Polemos basing system (60mm by 30mm), which I do not use.

Right now I have enough musketeer units based up for a basic 12 AP Russian list. All I need are a couple of Elite Musket units (Grenadiers or Guards), Light Infantry units (Jagers), and artillery. I have the artillery already painted, and heavy cavalry (cuirassiers) if I need them, but have to paint the Grenadiers and Jagers. I recently ordered more Baccus Russians from Scale Creep Miniatures, but this time I got the new Russian sculpts. As I had just finished painting some Russian Grenadiers that were the old sculpts, I can honestly say that the difference is tremendous, especially in the area of paintability. I am strongly tempted to sell my unpainted Russians that are the old sculpts! I will probably never get to them anyway, as I am now painting the new sculpts first.

As an aside, I also painted some Baccus 6mm Bavarian infantry from the Franco-Prussian War line, and those are some of the best Baccus sculpts I have seen. So easy to paint. For the FPW I am basing one strip (four figures) onto a 1" by 1/2" base, six formed bases to a unit, plus three skirmisher bases (two figures on a 1/2" square base) added. That makes each unit 36 figures – 24 formed and 12 skirmisher – and a 6" frontage. Much more spaced out than the Napoleonics, but still has mass. I will be using these with Black Powder. If those rules don't work out then I may blow the dust off of my copies of 1870, They Died for Glory, and Chassepot and Needlegun and finally give them a try. Although, it might be cool to convert Square Bashing to the FPW.

Once the basic Russian DBN list is done I will switch to the French so I can get down to playing some games!
Posted by Dale