If you were wondering why Shaun Travers (of Shaun's Wargaming with Miniatures blog) hasn't been blogging much lately it is probably because I have been taking up all his time with One-Hour Wargames (OHW) scenarios. We played Flank Attack 2 (Scenario 7) using Medievals and we just finished the first of two games of Late Arrivals (Scenario 10) using Ancients. A much different feel to the game with Ancients – Infantry hits with D6+2 but only take 1/2 hits due to armor – than with Medievals, Dark Ages, or Rifle and Saber.

More importantly, the scenario is really interesting because Blue is the defender and they have some hard choices to make. 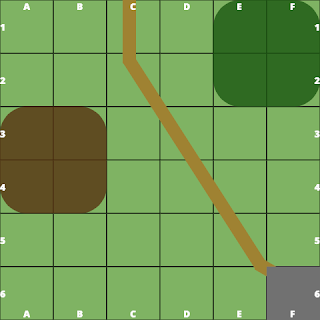 Shaun and I again used a 6x6 square grid for the game – essential for virtual gaming if you are not using a computer program to indicate your precise position and make accurate measurements – shown in the image above.

This means that a core Blue strategy is to defend in squares C3 and C4 with Infantry and hold the enemy off. However, Blue only gets two more units on turn 5, and the final two units on turn 10. Ancient Infantry, being D6+2, has an Average Turns to Eliminate (ATE) of 3, meaning that it can eliminate an enemy unit on average in three turns. However, if the enemy unit is also Infantry, because it has has armor (1/2 hits) the ATE is 5 turns. So, this really turns into a race because it takes two turns to move the infantry to row 2, then turns 3 through 7 will be spent chewing through that front line of enemy infantry. With Blue having 3-4 infantry in their force they could easily have the second wave up to the battle line by turn 8, which would cause another 5 turns of combat, at least, to chew through that line. So simply pushing the infantry forward will not win the objective.


Please note that I have the advantage of hindsight and playing once as Blue to give this analysis. My first attempt looked something like the image below. 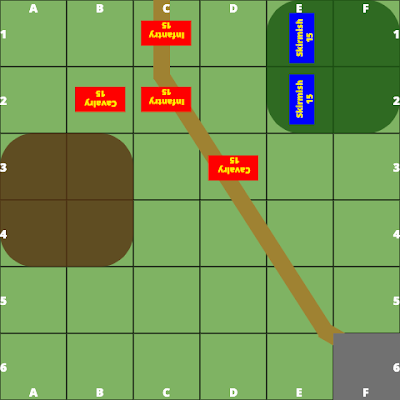 Trust me, the "Skirmishers in the Woods Gambit" is not a winning strategy. At D6-2 my Skirmishers were still cooking their breakfast in the woods when the Red Cavalry flew by, unscathed.

In my opinion, if Red does not have Skirmishers or does not have two Archers, I am not sure Red can win in the Ancients period unless Blue makes a mistake. If Red and Blue have Skirmishers, Blue might have to commit it to the fight at the start if the game, which would make for an interesting fight. As I said this is an interesting scenario, but there are some matchups that seem like they would always result in a Blue win because the clock runs out.

As you can see above, my first game 1 was a disaster. I did think about potentially pushing forward with the Blue Skirmishers to block enemy units from coming on at C1, but it seemed like such a low probability of success that we bagged the game early on. I threatened to play that setup solo, but have yet to.

I rolled and received three Infantry (of course!), one Archer, and two Skirmishers. To me, this was probably the worst combination I could think of. Two extremely brittle units and I would not have two full waves of dead hard Infantry.

Shaun rolled and received three Infantry, two Cavalry, and one Skirmishers. All I knew was that having Cavalry might allow him to make a breakthrough to get to the town and having a Skirmisher meant the woods were not impassable too. So my first decision was whether to use a solid line of Infantry and risk him flanking me with Skirmishers to break through faster or using one Infantry and one Skirmisher and seeing how I could contain him. I chose the former. 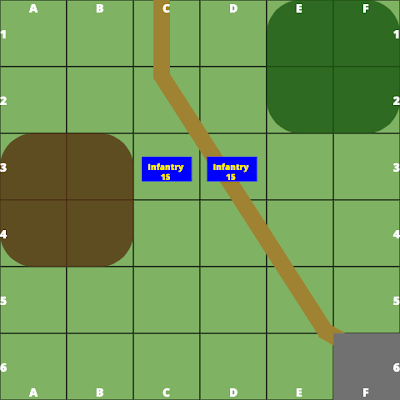 One of the other issues with this scenario is that Red enters from the northern road not the northern edge. This makes maneuvering out extremely hard and the introduction of the square grid does cause an issue with that, at least the way we play it.

I imagined the units stacked up in "C0", off the board. I felt like from there they should be able to move one square on, so B1, C1, and D1 would be eligible squares. But Shaun pointed out that the scenario says "via the road on the northern edge", so given that we play "in the square" the first movement point is in square C1. This caused a jam up of Red units, as you will see.

By the end of turn 2 you can see that the Blue Infantry have beaten up the leading Red Cavalry while doing almost no damage. However, I have this nasty habit of hitting units hard early on, then running out of steam while trying to finish them off. The main thing to notice as that only four of the six Red units have made it onto the board, with one Infantry and one Skirmisher still being off of the board. 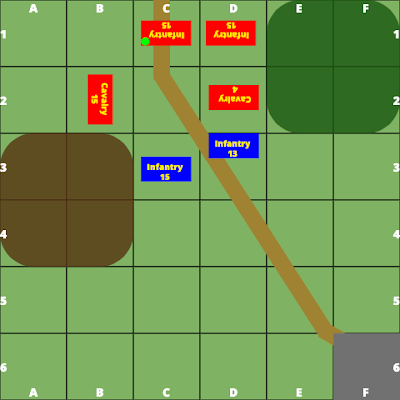 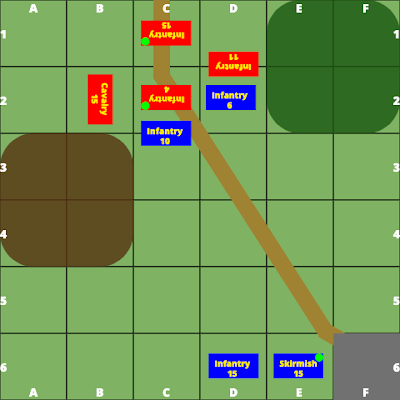 Turn 7 saw the elimination of the weakened Red Infantry in C2, but turn 8 saw the both units in the Blue front line eliminated. By then, however, the second Blue line was already in position. (Shaun forgot to bring on his Skirmishers, not that they could have gone anywhere.) 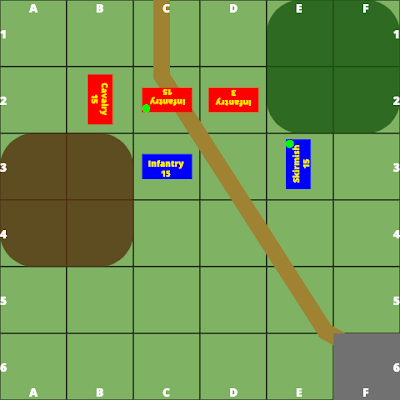 Turn 9 and 10 saw Red unable to break through the second Blue line, so with the final Blue reinforcements entering the board, Red quietly withdrew their forces. 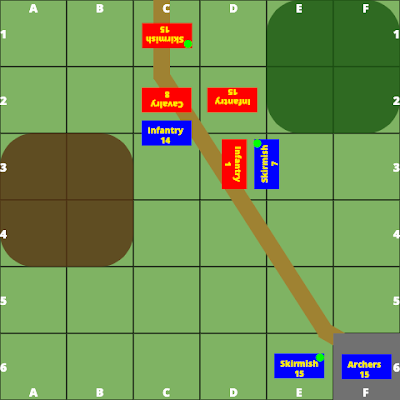 There are so many interesting combinations to think about here and how it would play out in different periods.

Medievals have mainly fast-moving Knights (D6+2, 12" movement), so unless Blue draws a force of two Men-at-Arms units (armored, thus take 1/2 hits like Ancient Infantry) the battle is not going to take place in rows 2 and 3, but rows 5 and 6.

Dark Ages have mainly Shieldwall Infantry, which take half hits like Ancient Infantry, but only hit with a D6, so it is an even slower slog through rows 2 and 3. I think it would be even harder to win as Red in this scenario during the Dark Ages.

Horse and Musket really changes things as Infantry now fire 12" with D6, so the name of the game is for Red to bring his superior numbers to bear, which is interesting given the confined space which they have to deploy to.

How do you think your favorite period (using the standard rules) would play?

What Else Have I Been Up To?

As it so happens, the writer of the blog Red Player One lives in the same area as me. He and I played a game of Starport Scum by Nordic Weasel Games and it was really fun. It has been a long time since I played a narrative (RPG-lite) scenario. The rules are very simple, but effective. My hero, Flavio, cut the anti-hero Ahnuld in half with a single stroke of his monofilament blade. That gruesome kill caused the rest of the security guards at the compound where my brother Squigi was being held. (Yes, the Flavio Brothers – Flavio and Squigi – were reunited so they could continue their criminal "plumbing" careers together.)

You can see some of Jason's cool terrain and figures over on his blog. The vidscreen of a pixelated geisha-like figure is hand-painted. Very cool.

Jason is a dangerous guy to hang around though as he is a rules junkie like me. I ended up getting copies of Starport Scum and 5 Parsecs after reading his blog. Then again, he ended up getting Battlesworn. (We were going to play that this weekend, but we ended up having to cancel.)

Although I did not give it a very strong try, I did try Star Wars: Legion and I just could not get into it. It has too many elements that I am not fond of. It is a very competitive 1v1 game where – unless you have basically bought one of everything or scoured the internet thoroughly – someone will eventually pull out something you have not seen and play gotcha! with a new special rule. Been there, done that with Warhammer 40,000, Warmachine, and Flames of War (multiple editions for each).

I finally broke down and purchased the next version of Warhammer Underworlds, Beastgrave. I continue to like that game despite not being able to get that many games in and it being hard to play solo given the amount of hidden information. But I am working on that. More later on the Solo Battles blog.

I have been doing some more painting. I am trying "comic style" which is a couple of steps beyond what I used to do as a kid, which is a heavy blacklining style.

Finally, about a third of my team at work were let go. Our company decided that they did not want to keep them and decided to let the remainder – largely a bunch of techno-geeks – take over their duties, which was managing accounts, in addition to our normal duties. I am not going to say much more than that other than to say that my blood pressure spiked, badly, and I needed to find another job because that was not what I signed up for. So I did. Rather than working for the company that makes software for the US home mortgage market, I will soon be working for a company that uses that same software, i.e. I will be a customer. My work with the product and insight into how it works under the covers really helped me leverage a new opportunity. So let's hope the grass really is greener on the other side...
Posted by Dale