As you may remember I purchased a Glowforge Pro Laser Cutter and Engraver in order to support my woodworking hobby, which largely consists of making wooden toy soldiers. Last post I showed the French Marine of the Imperial Guard figure where I used the laser cutter to cut out the shapes for the feet, arms, shako, and plume. Well recently I have been experimenting with cutting out custom bases.

One of my gaming buddies laments that, like me, he has a problem with deciding on a basing scheme, so he ends up re-basing a lot. Me, I end up splitting my collection across multiple basing schemes, thereby not having sufficient units for any one system for large games, despite having a large enough collection. (I have at least five different basing schemes for 6mm French Napoleonics.)

One of the ideas that I have been toying with is using sabot bases to facilitate these different basing requirements. The first problem is that the smallest bases have to fit within the larger base. Given that my primary goal is to use both a single figure basing scheme within a multi-figure basing scheme I usually find that the minimum size for a grippable single figure base is too large to fit the required number of figures inside a multi-figure base.

The image above is a good example. The multi-figure base on the left is a standard Epic 40K base measuring 40mm x 12mm. (An alternate size is 25mm x 25mm.) The three bases on the right are single figure bases, measuring 1/2, 3/8", and 1/4" across. Using the 1/4" base adds about 67% to the depth of the multi-figure base. Unfortunately, I find the 1/4" bases too small for my sausage fingers. 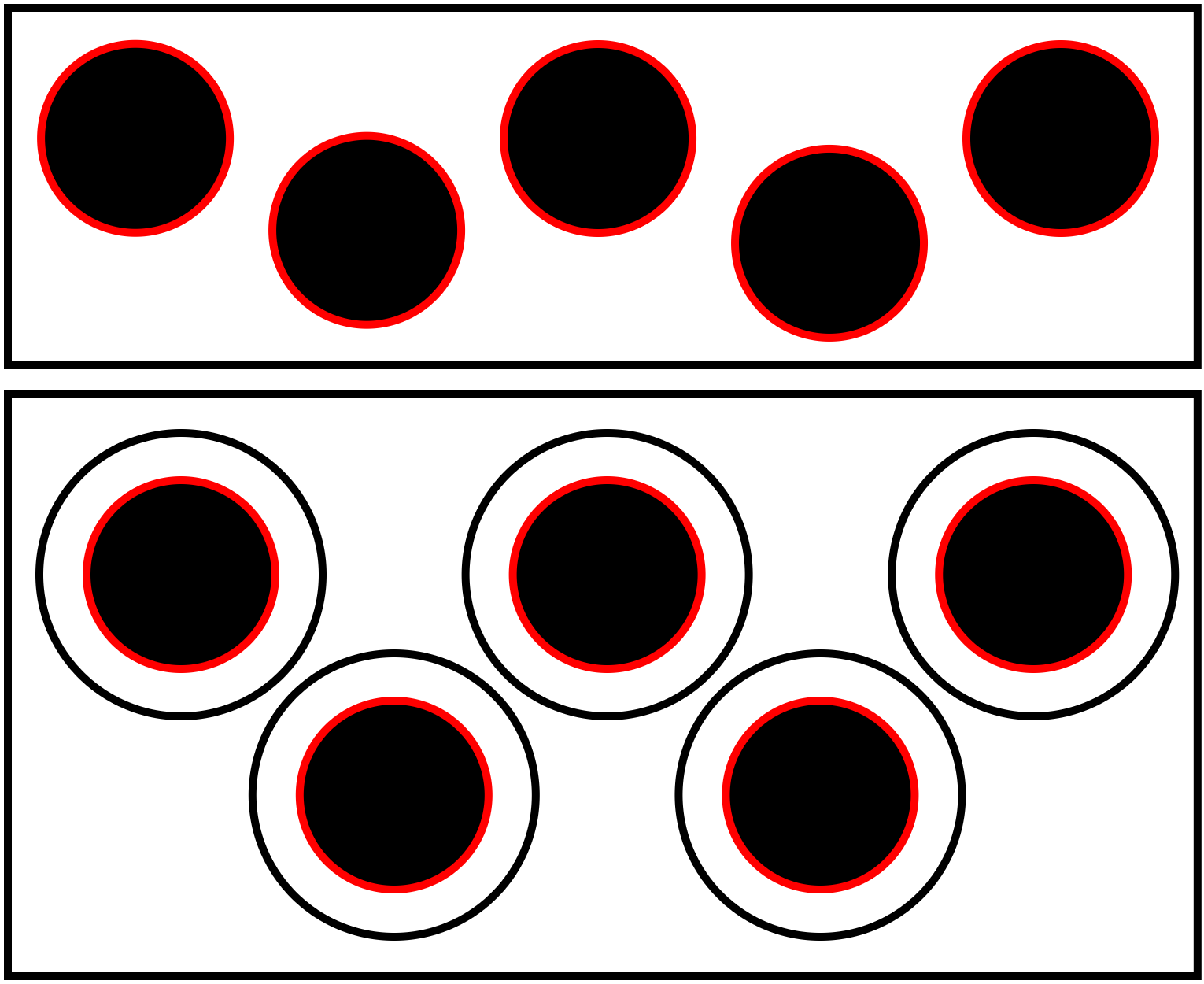 I decided to try my hand at a few designs. You can look at things on paper, but until you cut them out you really can tell how effective they will really be. 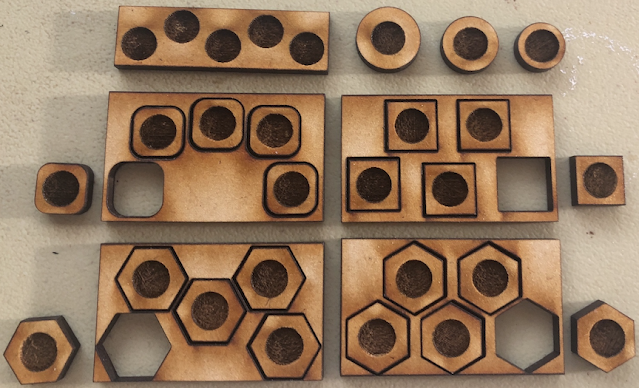 Once I got a good look at them and put a few figures on them (the dark areas are where the laser engraved out a well for the figures to sit, sinking the top of the figure's base level with the top of the wooden base) I could see that I preferred the rounded square single figure bases best of all. 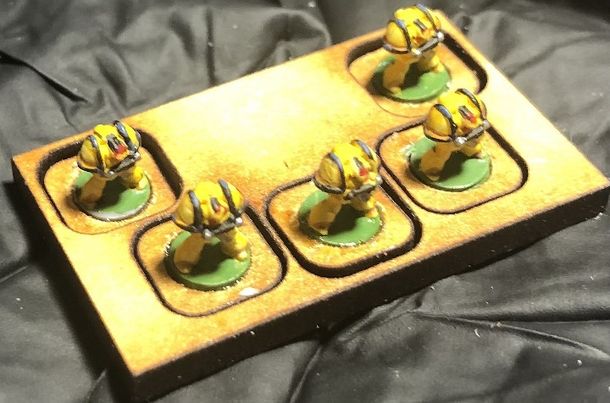 This led me to another idea, which is a base within a base within a base. Why? Well the innermost base is single figure, either for skirmishing or single-figure casualty removal. Those bases go into a smaller surrounding, multi-figure that is for more tactical games, say where you might have four bases form a unit. Finally, you have large larger base that allows you to use the mid-sized bases to form a larger unit.

Here is what I have in mind. 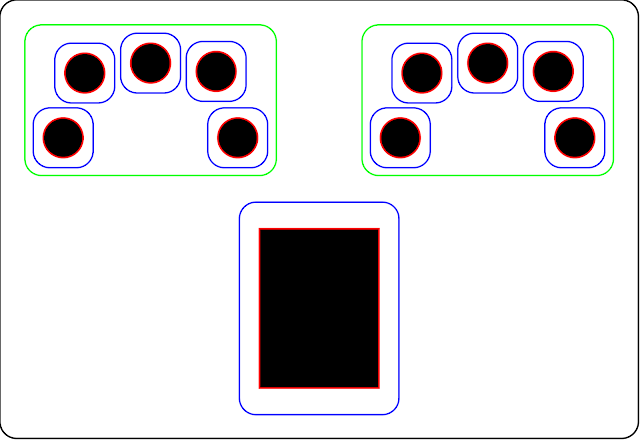 The outer base (black line) is 4" wide. A single base like this might be used for something like One-Hour Wargames (OHW), which incidentally has a Warhammer 40K variant based on the Machine Age rules in OHW. The inner bases (green line) represent the tactical bases, in this case two squads of infantry. Finally, the innermost bases (blue line) are the singly-based figures, in this case 10 infantry and one APC.

As I experimented with this concept I realized one issue: in order to make the sabot bases useful as movement trays I have to put a bottom below it. I generally use (unused) pizza boxes lined with magnetic sheet to hold my 6mm troops, so the bottoms of bases are either lined with more magnetic sheet, paper steel, or sheet metal. If the middle bases (green line) and outer bases (black line) both have bottoms, then the middle bases will not sit flush with the outer bases. In the end that may not matter, especially if I use very thin material like paper steel, which is only 0.025 inches thick.

Alternately, you could make two sets of outer bases, one of tactical base size and one of strategic base size. This would allow you to custom configure the larger base with individual figures and not be limited to how the middle bases are configured. 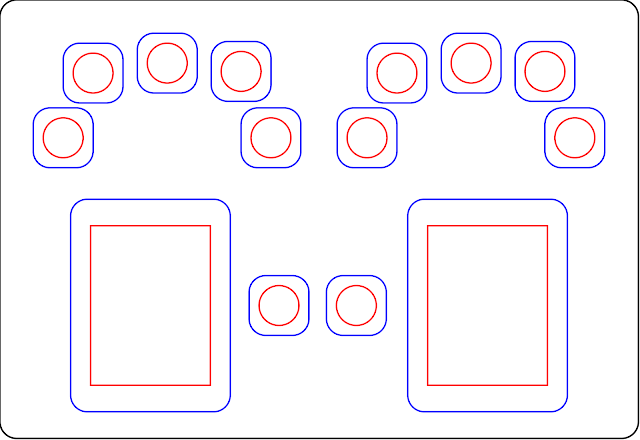 The more I think about this as I write, the more I like this idea better. It allow me to do things like change the spacing or pattern of the singly-based figures within the base, adding variety. 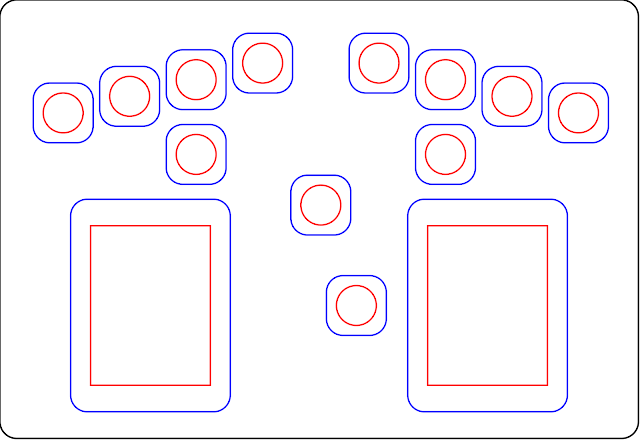 Speaking of lasers … these days I have noticed a lot of advertisements for the xTool D1 Pro laser engraver and cutter. It is far less expensive than my Glowforge. What I like about the xTool is that it has a rotary engraving attachment (so does the Glowforge, apparently, but I do not have it) – which I think would be interesting to use to try and score details onto my pawn soldiers – but more importantly it allows you to connect the computer to the machine via USB or wirelessly on a local network, rather than requiring an internet connection. That last point is important if you are putting your smokey, smelly laser cutter in a garage (and you should) and you don't have a great internet connection out that far. Further, the xTool uses standard Lightburn software while the Glowforge software is on a server that they own. If they ever go under then your unit might become a brick. (They have promised to release the software to the public should they ever go out of business, but who knows what the bankruptcy courts would decide, if that ever happened.)

The D-series is an open box, whereas my Glowforge is a closed system with ventilation. Given the smell of cutting wood, even with the ventilation, I am glad I did not start with an open system. I would have filled my work area with smoke. xTool does make a closed system, which is slightly more expensive. If I were buying another, I would probably buy the open system and get it to where I want it before selling the Glowforge. But at this point, I am not looking to change, despite how cheap the new systems are and even though they are so much better now than mine (faster, finer cuts, etc.).

If you are considering a laser, the xTool ones look pretty good.