There was a post on The Miniatures Page about a "new" company making 6mm sci-fi figures: Onslaught Miniatures. I took one look at their "Legion" line (not-Tyranids) and thought: "okay, I need to pick up some of those." I have a bunch of 6mm Games Workshop Epic Space Marines, Orks,  Chaos Marines, and Eldar and the one thing that has always been out of reach for me have been Tyranids. Seems like every time they come up for sale the price just goes too high for my taste.

But Onslaught has some figures that will definitely stand in for them. Here are their Gashers (not-Hormagaunts), Stalkers (not-Termagants), Prowlers (not-Genestealers), Winged Stalkers (not-Gargoyles), Overseers (not-Tyranid Warriors), and Mantis Beasts (not-Lictors):
As you can see these little guys look pretty cool! Well, the figures came in pretty quickly and darned if they don't look better in person. I quickly started basing some up for a new game (don't ask!) and for some In the Emperor's Name skirmishing. I got to finish painting one of the Matis Beasts (which is really quite tall) and it painted up very nicely. Next will be the Prowlers, which are quite small. We will see if those continue to be as easy to paint. I am fairly certain they will as the detail is very crisp and well raised.


I painted the figures white, then washed the figure entirely with Citadel Purple Wash (the older stuff, not the new ones). I then picked out the white areas with a small spotter brush, leaving the purple wash behind in the crevices. As you can see, the deep recesses of the figure make this quite easy to get a decent effect. I then painted the armor plates purple and the claws red. I make use a brighter red at the very tips (I am still thinking about it).

Note that this figure is about 10-12mm, as it is a giant in 6mm scale. But all in all, very detailed, quick and easy to paint, and a fun looking sculpt. To get a sense of scale, here it is beside GW Epic Eldar (new sculpt) and Space Marine (old sculpt) figures: 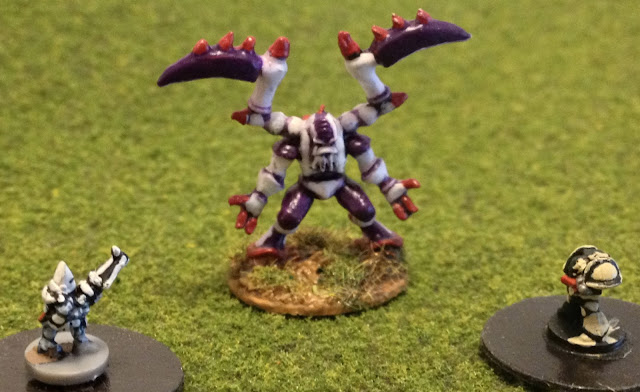 What has me drooling are the not-Tau: They all look very fun to paint!

At $7.50 for 25 figures (of the smaller models) they are certainly more expensive than Baccus 6mm (you would get about three times as many figures for the same price), but I think the quality is better.

So, if you are an GW Epic 6mm fan, head on over to Onslaught Miniatures and check them out!
Posted by Dale