First off, welcome to new reader InChigh74. Your 20mm WW II figures look really nice. Other might want to check it out on his blog, 1914-45. As always, I hope you enjoy the writing – even if the subjects are all over the place – and comments are always welcome. 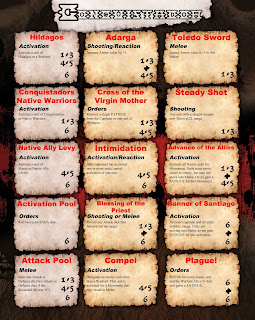 Ralph Krebs (Bowman) has been working on some Saga battle boards for our A Mesoamerican Saga project. I drafted up a graphic from his specifications, but have not had a chance to try it out (mostly as I have no figures for them). Comments are welcome, as always, and discussions can be found on the Mesoamerican Saga Forum.

I need to create a template for the faction rules, but here they are for now:

This board definitely needs playtesting. With five of the ten right-side abilities requiring two dice, two of them require two rares, this will be a tough faction to play. Let us know what you think.

I have enough 6mm science fiction figures based (but not painted) for a test game of C4ISR; now I have to work on the Command cards. I will probably just use the Memoir '44 deck to start though. Part of the concept was to have specialty cards embedded into the single card deck, then having rules to allow a player to make sure his hand was not clogged with them. Really, it was about having to manage only one hand, and this came from a complaint that some of the complexity of BattleLore was in having to manage two hands and a token pool. As I think about Memoir '44, however, we sometimes manage two card hands (Command and Combat), but no tokens to "spend". So maybe the line is that two hands and a token pool are too much to handle but two hands are not. In any case, moving to two hands removes a bunch of rules designed to make sure you don't end up with an unusable hand.

Part of this has come about by playing Samurai Battles. In that game you get a spendable token each time you roll the "miss" symbol (the "Honor and Fortune" symbol in Samurai Battles, the "Lore" symbol in BattleLore, the "Star" symbol in Memoir '44, etc.), but you can also get either two tokens or one "Dragon" card (equivalent to a "Combat" card in Memoir '44 or a "Lore" card in BattleLore) every turn. If you get "lucky" with your misses, that means you can rack up quite a hand with "Dragon" cards, something not possible with BattleLore (which imposes a limit on the number of "Lore" cards held) or Memoir '44 (which limits your ability to draw "Combat" cards). As all of these cards represent combat buffs and game changing events, games of Samurai Battles tend to be a bit more raucous than the others in the Command and Colors family. I want something with more impact than "Combat" cards, less than with "Dragon" cards, and more like the impact of "Lore" cards, but without the token pool management.

And therein lies the problem. Lore strategy centers around the cost of playing Lore cards (i.e. do you play a lot of low-cost, but low-impact Lore cards or do you play fewer high-cost, high impact ones). So if you take out the token pool management aspect, you reduce high- and low-impact cards to the luck of the draw. I am not sure I like that, so it requires a little more thinking.
Posted by Dale