I was able to get another Warhammer Underworlds warband completed. Lest anyone think I am out of work, I am not. (I am very lucky in that regard. My wife, however, is a nurse at a hospital, as is my daughter. Everything still good on those fronts too.) I have just been focusing more on painting over tabletop, computer, or virtual gaming. (Shaun Travers burned me out for a week or so on the latter. I may have possibly burned him out too as I have not heard from him. Shaun, are you still out there?!)

So, why all the painting? As I have probably said more than once, I have a tendency to rotate through my hobbies, of which gaming is only one (well, two, because I consider tabletop gaming and computer gaming separate and distinct, while virtual gaming is a variant of tabletop gaming). Painting miniatures and making them are two other hobbies. Clearly I am in "painting mode", which I have not been for quite some time.

These figures had been partially painted twice before, along with being stripped twice. This time I primed them white and went to town with contrast paints.

The first color is the bluish-gray used for the metals. This is the Space Wolves Gray color. As you can see it is a bit blotchy in color. The first time I used it I tried to even out the blotchiness by painting another coat. Then another. Several coats turns this paint into a very dark shade of bluish-gray. Because it has some medium in it that makes it thicken relatively quickly it is hard to soak up the pools of paint before it thickens. If it gets too thick then trying to soak up the excess paint breaks the surface of the paint, which looks even worse. I need to find a mix of paint and flow aid/gloss medium/gloss gel that will smooth out the pools on the flat areas while maintaining its ability to collect in the crevices, creating the contrast. As it stands, I like it as a bluish "non-metallic metal". 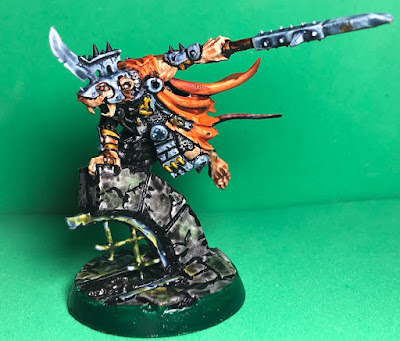 You can see the chainmail and stonework were painted the same color, despite the former representing a different shade of non-metallic metal and the latter representing stone. That is the Basilicanum Gray contrast paint. This too is a very blotchy paint on flat surfaces. I think it works better for chainmail than it does for stone, but neither are really bad for tabletop standard. I think if you undercoated the chainmail with a true metallic, then used this gray, it would look better.

The gild work on this next figure's helmet is one of the yellows in the contrast paint range. It is clearly too yellow for a gold, but I later found out that if you use the flesh color as a wash over it, it takes on a deeper golden tone. So I may go back and do that. That is one of the things I like about singly-based figures. In theory, you can always go back and add a little more detail later. In theory... 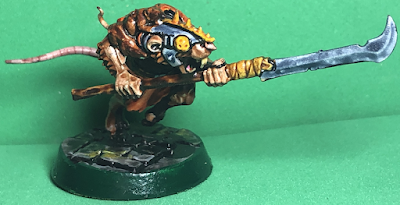 I used the standard human flesh color for the flesh of the ratmen. I wanted the color of the tails to be a bit more distinct from the rest of the flesh, so I mixed the flesh color with the pink in a 1:1 ratio. That toned down the near-magenta look of the pink contrast paint. 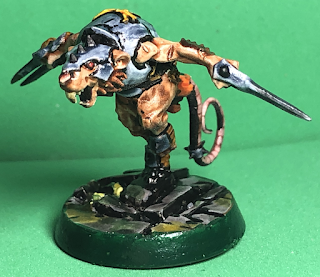 I wanted to make sure that my browns were distinctly different colors, so the flesh was a light red-brown, the fur a deeper red-brown, and the wood was a mid-brown to which I added a coat of yellow-brown on top. Again, another nice quality of some of the contrast paints is that they are weaker and make great glazes so you can apply colored filters and subtly change the final color value. 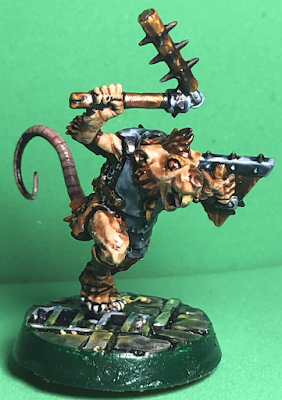 A good example is the base of the figure above. The sewer grate is the same bluish-gray color of the armor and the flagstones are the previously mentioned gray, but I have used two shades of weak green as filters to spots in order to give the appearance of algae-covered stone.

The final two colors used were the Gryphon Orange, for the cloth, and Snakebite Leather, which appears on the hood of this character.

The orange is simply too blotchy to be used as what most people would use it for, representing cloth. If you use it for hair, well, it will be some pretty bright hair. Like dyed orange hair. As a cloth color, however, it just does not go on smooth enough, like the bluish-gray. Maybe more coats of the orange would not be a bad thing. I think it is one of those colors that simply need tweaking with either contrast medium, flow aid, or acrylic gel. 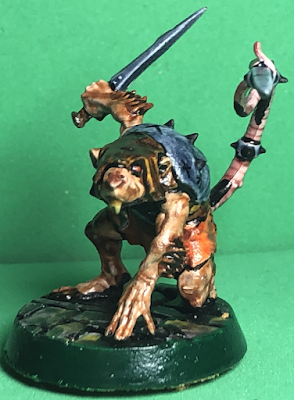 Snakebite Leather used to be a classic yellowish-brown in the Citadel paint lineup that was great for leather (hence its name). Alas, they are no longer sold and the "replacement", Balor Brown, is not the same. (Or rather, no longer sold by Citadel. I hear that the same color is a part of the Coat D'Arms paint line.) It seems like if you slather the Snakebite Leather contrast paint on, in several coats, it has a quality much like the old paint of the same name, but I hate painting the same spot over and over to build up a color, so I need to find a formulation that fixes this contrast paint.

All in all, I like them. I used to be able to do much better, using a much cleaner style. (Maybe someday I will post picture of my old miniatures, from 25+ years ago, but it might depress me.) But for what I am aiming for – tabletop ready troops – this is fine.

This will probably be the last fantasy subject for a while. I have quite a collection of unpainted 15mm Classical Greeks – as in hundreds of them – and I am now very curious about painting them with contrast paints.

Will they look okay? It is possible that they need deep creases in order to look better, but I won't know until I try.

Will they be significantly faster to paint with contrast paints? Given that they have been sitting in a giant plastic tub for damn near a decade the significant factor is actually attempting to apply the paint.

Can I make the right colors? I consider ancients sort of cheating in this regard because we have very few examples of the exact Pantone shade used in ancient times! 😁So I think pretty much any dull color I use will be good. You can further vary the shades by changing the primer color from white to light gray to beige to light blue and these will change the color values of the contrast paints as many of them tint the undershade.

So, hopefully I do not burn out before I get that project started.
Posted by Dale No comments: