Have you ever wished for a material that you could use to strengthen miniatures without  significantly altering it or increasing it in size? I always dreamed about a 'plastic coating' that I could put on a miniature that would somehow make weak parts more rigid, like swords, bayonets, spears, flag poles, and such. The image below shows an example of what I mean.

I purchased an Aztec army from a gentleman selling off his friend's collection to help out his friend's widow. The figure on the right is what I received (less the basing). Notice the spear in his hand. These figures are not pewter, they are lead, and the spear is like limp rubber. It does not take much handling to bend the spear shafts. Eventually it will break. 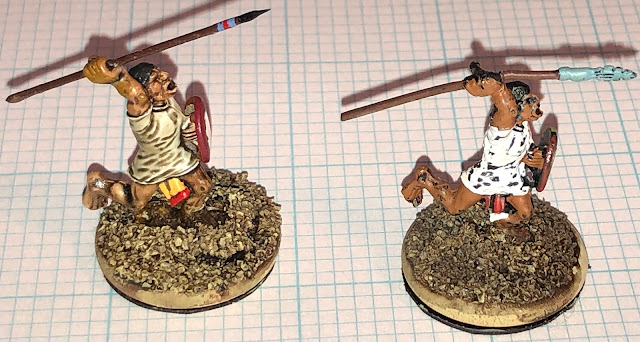 The figure on the left is one that I washed and touched up, but also where I replaced the spear with steel piano wire. (That point is deadly sharp, I can attest!) I had to replace the spear on that one because it was so badly damaged it was unsalvageable. It would have been nice to be able to put a coating of some on the lead spear that would make it more rigid and less prone to bending without having to remove the spears that were epoxied (not white glued or superglued, but old, solid, two-part epoxy) to the hand. Each figure would require drilling and scraping that old epoxy out and in the end I lose that distinctive, cast obsidian spearhead.

Noticing last night how the Bondic filled gaps and essentially looked like a clear, hard plastic in the gaps, I decided to try some on the lead spears to see how well it held up after the Bondic cured. Given the quick curing time it does not really have enough time to droop and bead on the underside to the extent that two-part epoxy does.

First I straightened out the spear and then I put a very small drop on the top of the spear, spreading it out with the applicator tip just on the topside. I cured that and tested. It definitely added rigidity, but it went from limp rubber rigidity to that of medium softness plastic. Better, but still not there. I applied a coat to the underside, cured, added another to one of the sides, and cured. By then it was starting to feel as rigid as hard plastic.

The Bondic did not appear to add substantially to the size and volume of the spear, but you could feel the unevenness of the application. If I painted over the material with paint I am sure you would see it. Instead I will probably varnish over it with matte varnish in order to take away the obvious shine. 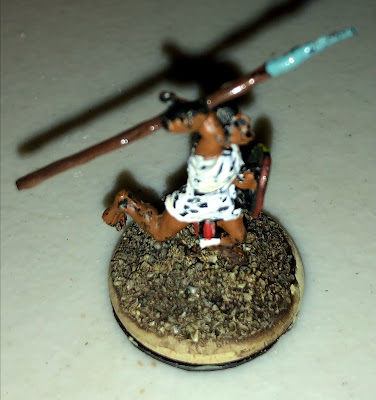 I will let you know if my opinion on using Bondic to strengthen miniatures holds up. If it does, I can see using this on spears, swords, and bayonets on 6mm figures (especially resin printed miniatures) and soft plastic figures like Airfix and their sort.