Lately I have been experimenting with re-basing my 6mm Napoleonics. Initially, I based them two strips (eight figures) to a 20mm by 20mm magnetic base. If I wanted to use a particular set of rules, I would stick them to larger metal bases. The problem is that 6mm figures don't have much physical mass. Adding more figures help, but it simply doesn't offset the lack of mass of color of 15mm or 28mm troops.

What 6mm troops can do is show historical-looking formations (or what we think of as historical-looking) much better than 15mm or 28mm troops can. Unfortunately, putting figures on small bases and then attaching them to larger bases looks just like what it sounds like. After trying this for awhile (and spending a bit of money on 20mm square magnetic bases, glue, and flocking), I realized that they just didn't look very nice.

Then I saw some pictures of other people basing 6mm miniatures on large bases where they added small terrain pieces making the bases, in effect, little dioramas.

The first image shows my attempt the 87th Foot from a side view. I am trying to show skirmishers in front and supports in the middle, with the battalion in the rear. The next picture is the same base from the front.

The base has changed a little since the picture, as I have added a mounted officer between the battalion and the skirmisher supports to represent the Colonel.

My next efforts will be different in that the skirmishers won't be in pairs, so there will be more separation between the skirmishers and the supports. Also, the Colonel will be behind the battalion and I'll add a couple of figures as file closers.

I've mounted up some French (the Irish Legion, actually), but I need to take the pictures. 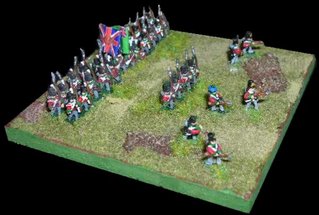 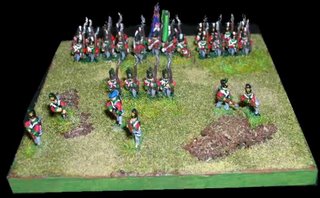