BattleLore on the Tabletop (Part 1)

In a previous blog entry I pondered how to bring the Command and Colors series of games to the tabletop. It is relatively easy, if you design a hex board of the appropriate size and divide it into three sections, per the standard rules. However, I wanted more of a free-form game system, similar to Battles of Westeros.

The basic system is to assign a certain number to each side, indicating the number of dice to roll, which in turn would indicate the number and type of units that could move that turn. (These number was called the Command Rating.) Unused dice could be saved and used in a future turn. This would allow you much greater freedom in which units could move, and in what part of the board, but there would still be a luck element representing the chaos of the battlefield.

That blog entry had some ideas about making groups of orders and changing the color of the dice, etc. and that was all well and good, but when I started to test it, I pitched it all out as it adding complexity (bookkeeping) while giving little advantage at all.

The second idea I had was to allow the player to either play the dice rolled or use tokens from the pool, but mechanically that failed miserably as I tried to sort out which token was this turn's and which was in the pool.

So, here are the basic rules:
So, the basic idea is roll dice to get colors, play colors as you see fit (and have tokens for) and have jolly good fun. So, let's test it out.

Nothing like a good battle with Elves and Dwarves at each others' throats, except BattleLore does not really have Elves. Here are my rules for them:

1 During the test game I made them 2 dice, whether they moved or not. I decided later that they should be better when standing.

I needed to stop, as I had a (face-to-face) game to go to and I needed a bit of a stretch, as I had been sitting down all morning. So, here is where the game was left off at. 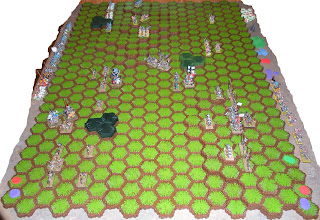 As shown in the picture above (click to enlarge), the Human/Dwarves are on the right and the Human/Elves on the left. The Elves have largely been wiped out by the Dwarves, but those Dwarves on the hill are slowly falling to the superior missiles of the Elves.

In the center, the HE Knights were crushed by the HD Knights, but the HE forces have mustered swordsmen and archers to back up the remaining Knight while Knightly reinforcements are brought to the left. 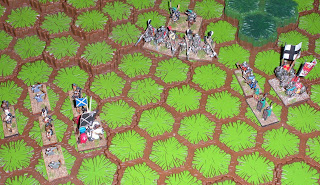 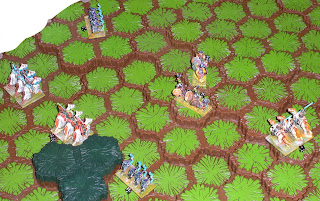 So far it has been a very interesting game. Slow to develop, to be sure, but fun nonetheless. I think these rules lose nothing by allowing the player to pick and choose units from here and there all over the field, however there needs to be some incentive to having leaders, and to using orders to apply to groups. I'll explore that next time.
Posted by Dale